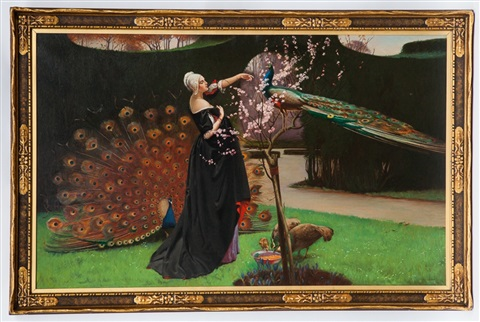 A lull in the wind, pause between snowfalls,
between scattered stars, crescent moon long set.
She eats rice pudding in bed, licks the spoon,
construes poetry instead of sleeping.
On the wall beyond her feet curious
birds peer from the verdure. A lion cub
sinks his teeth into a startled pheasant.
On the wall behind her head, an enclosed garden,
a cherry tree - bound and staked, blooming yet.
A woman reaches for a peacock perched
in pink blossom, at her hem another
spreads its golden tail, its myriad eyes.
Nothing between one end and the other
but time and the centipedes of night.

NOTE: The poem refers to Charles Wright’s poem “Time And The Centipedes Of Night”, which itself refers to a ci poem Song Dynasty poet Su Dongpo (AKA Su Shi) wrote to the tune “Partridge Sky.” The poem also refers to the painting by John Young Hunter used here as an illustration. The painting dates to between 1899 & 1910, & thus the image is in the public domain.