twilight’s losing its cobalt blue momentum;
it comes down to three red lights suspended in

a horizon silver as that one stopped car:
pinprick planet next to this swelling crescent

bare chestnut limbs a character inked on this
violet sky—what does their radical mean?

white musk odor of Queen Anne’s lace on the lawn:
half moon bowing its head in recollection

those nameless trees on the side street look that much
darker than the sky; bus stop shelter absorbs

the red light’s spill, but is otherwise empty—
moon out of round against a purple curtain

the Siamese cat materializes
from the patio shikimi, blending with

this sun highlights the galvanized downspout’s joints;
the hummingbird feeder, dangling from a beam,

is filled with sugar water, & plums shine ripe,
but the half moon’s upturned bowl sinks into clouds

it circles that crow standing in Queen Anne’s lace;
this moon has grown so faint you’d need to look twice

Image links to its source on Wiki Commons:
Statue of a Taoist sage. 16th century. Photo by Wiki user BurgererSF, who makes it available under the Creative Commons CC0 1.0 Universal PublicDomain Dedication. 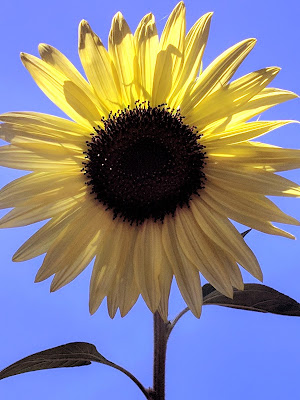 chaotic Queen Anne’s lace; it might even droop
away from unclouded sky—nothing to see

there except the sun & you can’t look at that
long—but see what it inscribes casting shadows:

this that weary glad hungry loving thee me—
look at the zenith! the pale yellow petals!

Checking in on the poetry front with the title poem from the most recent collection, which will when finished in early October complete the trilogy started last autumn with Crow on the Wire. The second book, The High Lonesome Sound, should be available within the next couple of weeks. Thanks as always for your interest in my poetry.

Photo © 2017 by  Sandy Pullella. All rights reserved on poem & photograph.
Posted by Unknown at 8:50 AM No comments: 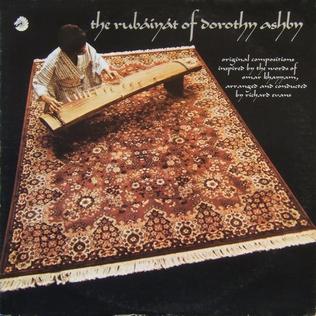 Welcome back to Sunday music on Robert Frost’s Banjo—& this week it’s even posting on Sunday.

We’re wrapping up this month’s feature on Dorothy Ashby with the opening track from her 1970 Cadet album The Rubaiyat of DorothyAshby. This release not only features Ashby as a vocalist, but she also plays koto in addition to harp. The Allmusic review I’ve linked to the album title is well worth a read; reviewer Thom Jurek concludes his write-up with this statement: “For those who remain open, this may be her greatest moment on record.”

For those who are interested, here’s a Wikisource link to Edward Fitzgerald’s famous 19th century translation of “The Rubaiyat of Omar Khayyam”; the poems provide the text for Ashby’s songs.

Hope you’ve enjoyed this look at Ashby’s work & have been inspired to explore her music more thoroughly.


“This is the cover art for The Rubaiyat of Dorothy Ashby by the artist Dorothy Ashby. The cover art copyright is believed to belong to the label, Cadet, or the graphic artist(s).” Wiki Commons claims “Fair Use” for the image.

My apologies for how late this “Sunday music” post is!

We continue our DorothyAshby series with a track from her 1984 Phillips album, Django/Misty; here we have Ashby’s take on John Lewis’ composition, “Django”, named of course after the great guitarist Django Reinhardt.

There isn’t much background information available on the Django/Misty recording. Ashby recorded this & Concierto de Aranjuez for Phillips in 1984; they were her final albums as a leader, & indeed came after a 14 year absence as a leader on a recording. Before Django/Misty, her previous lead had been on the 1970 Cadet release, The Rubaiyat of Dorothy Ashby. Ashby did considerable work as a sideman in the 1970s, however, appearing with such notables as Stanley Turrentine, Bill Withers, Billy Preston, Freddie Hubbard, as well as on Stevie Wonder’s great Songs in the Key of Life album—yes, that’s Ashby playing harp on “If It’s Magic”.

We’ll return next Sunday (I hope next Sunday!) with the final installment in the Ashby series. Enjoy!

Image links to its source on Wiki Commons:
Per Wiki Commons: This is the cover art for the album Django/Misty by the artist Dorothy Ashby. The cover art copyright is believed to belong to Philips Records.
Wiki Commons claims “Fair Use” for the image.

Today’s selection is Ashby’s composition “Games” from her 1968 Cadet release, Afro-Harping. This album features Ashby backed by an apparently unknown orchestra (including theremin on some cuts). Allmusic reviewer Ron Wynn describes Afro-Harping as “the best and most complete album done by jazz harpist …Dorothy Ashby”; Joshua Weiner, writing for the all about jazz site finds the album more a product of its particular time, a proto example of acid jazz, but still describes the music as “fascinating”, & goes on to write:

Those interested in 60s mod will enjoy it for its own sake, while others will be provided with an interest-piquing introduction to a largely forgotten instrument, and musician, in jazz.

Image links to its source on Wiki Commons:
“This is the cover art for Afro-Harping by the artist Dorothy Ashby. The cover art copyright is believed to belong to the label, Cadet, or the graphic artist(s).” Wiki Commons claims fair use for this low-resolution image.

Come to utmost emptiness,
preserve deep stillness.
The ten thousand things arise as one,
& as we see return to their source.
Returning to the source is called stillness—returning thus is unchanging fate;
where the unchanging is known there’s wisdom,
where the unchanging isn’t known, there’s lawlessness.
Knowledge of the unchanging embraces all, & embracing all is justice.
justice then is majesty, majesty then is divine, the divine then is the Way;
the Way endures through time.
One who follows the Way is free from peril even until death.

Image links to its source on Wiki Commons:
“Four Immortals Saluting Longevity”: Shang Xi, early Ming Dynasty, hanging scroll, Color on silk. (“The immortals are from left to right: Shide standing on a broom, Hanshan standing on a banana leaf, Iron-Crutch Li standing on a crutch, and Liu Haichan riding a 'Chan Chu' three footed toad. The being riding the crane is the Longevity Star God”).
Public domain. 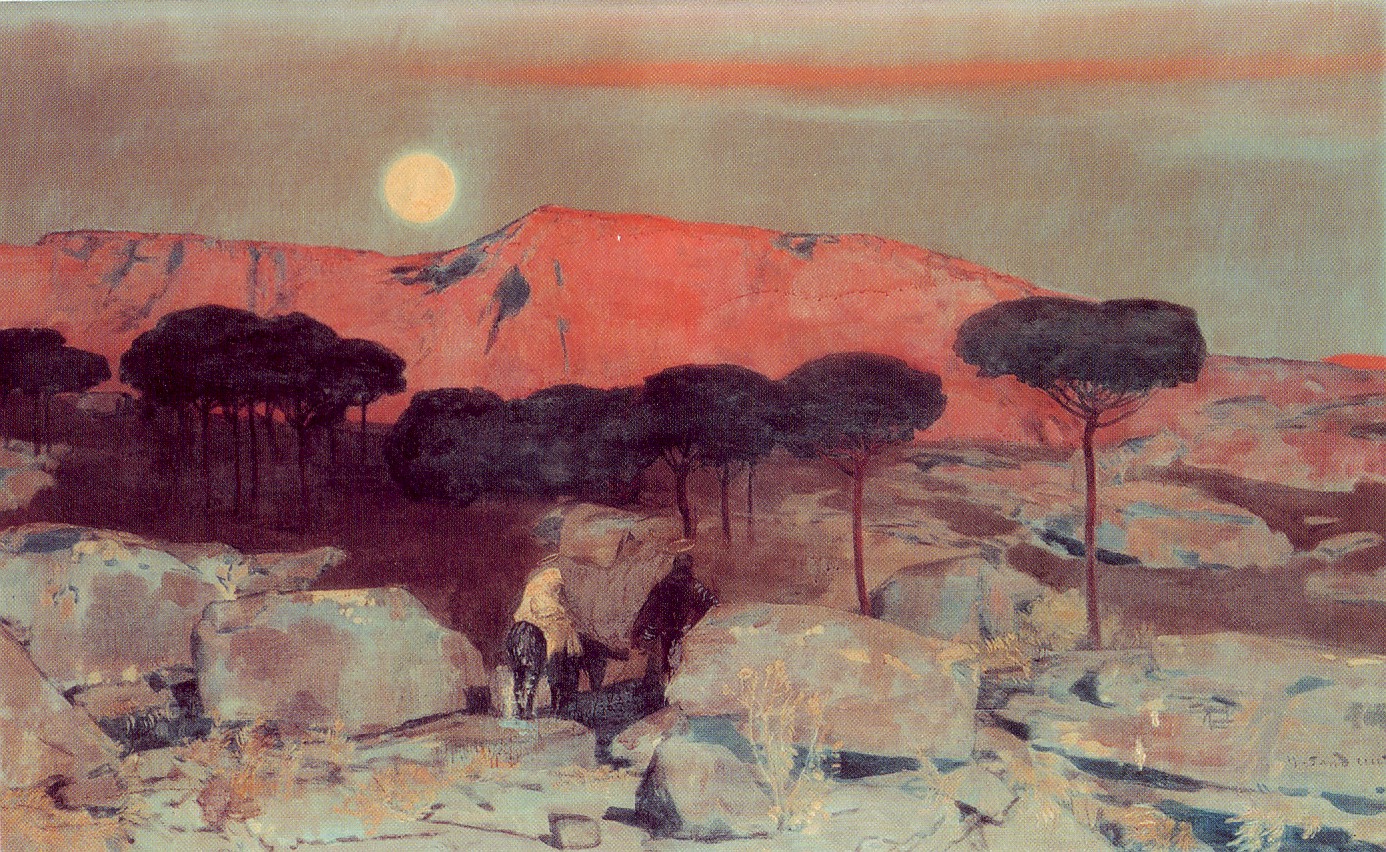 My father’s sleeping. His august countenance
implies a gentle heart;
just now so sweet…
if there’s anything bitter in him, that will be me.

there’s loneliness in this household; praying;
and there’s no news of the children today.
My father wakes, auscultates
the flight into Egypt, the stanching goodbye.
He’s now so close;
if there’s anything distant in him, that will be me.

And my mother walks there in the orchards,
savoring a flavor already without flavor.
She’s now such softness,
such a wing, such an exit, such love.

There’s loneliness in the home without any racket,
without news, without green, without children.
And if anything’s broken this afternoon,
and falls and creaks,
it’s two roads, white, curved.
My heart moves along them on foot. 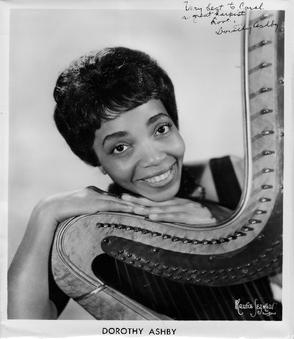 Today we begin our August feature for Sunday music; this month’s feature artist is jazz harpist DorothyAshby. & when we say “harp” here, we don’t mean the slang for a harmonica; we mean an actual harp.

Ashby is an overlooked figure in jazz history; in general, the canon hasn’t given their due to women instrumentalists, & has rather focused on including vocalists. But Ashby was a true innovator, a composer, & a virtuoso player who was able to adapt the harp—an unusual instrument in a jazz context—to bebop. Indeed,the only other well-known jazz harpist being Alice Coltrane, who was also a pianist.

Image links to its source on Wiki Commons:
Autographed photo of photo of American musician Dorothy Ashby. Wiki Commons lists the source of the photo as this link, & claims “fair use”. There is apparently no public domain or copyleft photo of Ashby.

I’d like to forgive my lungs’ malfunction, ask
my lungs’ forgiveness too; cigarette smoke sky

billowing congestion all the way up to
the afterlife, its sequestered, collapsed stars:

coffee shop windows lined with brown paper, crow
gliding above the roof is the logical

three salsify stalks quake too on sunburnt grass;
is it traffic is it the north wind the crow

intersects gliding east into the past, in-
to overcast static in mutable flow,

this body walking west where the two trains pass,
my breath in sequence with the walk sign’s countdown

an assemblage of orange decoupage suns—
whatever moon there is: blue in this high sky

on the patio—playground gate’s still open:
crescent drifts off to sleep in gathering clouds

at sunset, a silhouette near the black plum:
half moon’s equilibrium in fading blue

the scrub jay’s plumage forms a map of the sky
except for the sunset’s yellow cirrus glow;

the clematis has unfurled its purple cross
in the shadow of the board fence, below the

slats on the white blinds have been slanted open:
moon bracketed by clouds rises between them

the sidewalk’s hump over the tree’s knotted root
is strewn with ripe cherries, some crushed, some intact;

a single fruit falls, rolls down the sloped pavement:
half moon tips toward the branches’ tangled curve