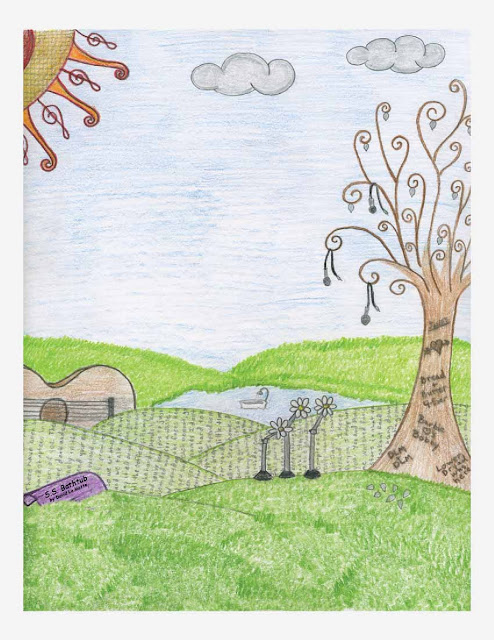 [I love this poem & this drawing by Barbie Angell, & I know you will, too.  Please stay tuned, because there's an announcement following the poem!]


She’s living in a song
Somewhere inside a phrase.
A simple soft menagerie
Not breathing till he plays.
She’s safe inside the tune,
No fears can catch her now.
Amidst the chords and melodies
Until he takes his bow.

She comes to life on stage
Each heartbeat is a note
Given birth to on the page
By the lyrics which he wrote.

At the listener’s request.

You’ll be hearing a lot more about David LaMotte in the next week & change here on Robert Frost’s Banjo. Barbie is writing a post about Mr LaMotte that will appear on Thursday in support of one of his current projects, a children’s book based on his poem, “White Flour.” This is a really worthwhile endeavor, & I encourage you to check out the project’s Kickstarter page & also stay tuned forBarbie’s more in-depth write up this Thursday!
Posted by Unknown at 4:00 AM