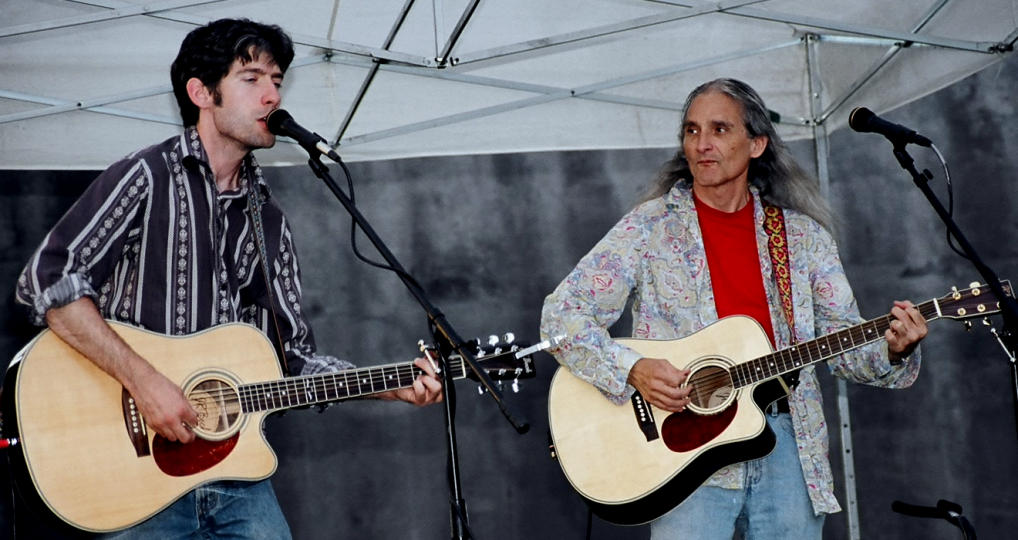 My apologies for the Sunday Music feature appearing on Monday afternoon! But that’s kind of how things are this summer—& it is, as they say, “all good”.

We finish our look at the music of Jimmie Dale Gilmore with a relatively recent performance of one of his original Flatlanders songs. Gilmore also recorded a version for his 1991 Elektra release, After Awhile.

In the video I’ve included with this post, Gilmore is joined by Butch Hancock, another of the original Flatlanders, & their sons. For those who just want the song & not the banter beforehand, skip ahead to 5:00 minutes into the video—but you’ll miss a wonderful conversation between Gilmore & Hancock if you do.

Hope you’ve enjoyed this look at Jimmie Dale Gilmore’s music, & that it’s inspired you to look more deeply into his work & the recordings of the Flatlanders as well. We’ll return with a new featured artist in August—& will make every effort to post the Sunday Music features on Sunday.

Image links to its source on Wiki Commons:
Photo of Jimmie Dale Gilmore and Colin Gilmore at Deep Eddy Pool in Austin Texas, June 2004. Photo by Steve Hopson. More information about photographer and other images at Stevehopson.com. Steve Hopson makes this image available under the Creative Commons Attribution 2.5 Generic license.

Posted by Unknown at 2:51 PM No comments: 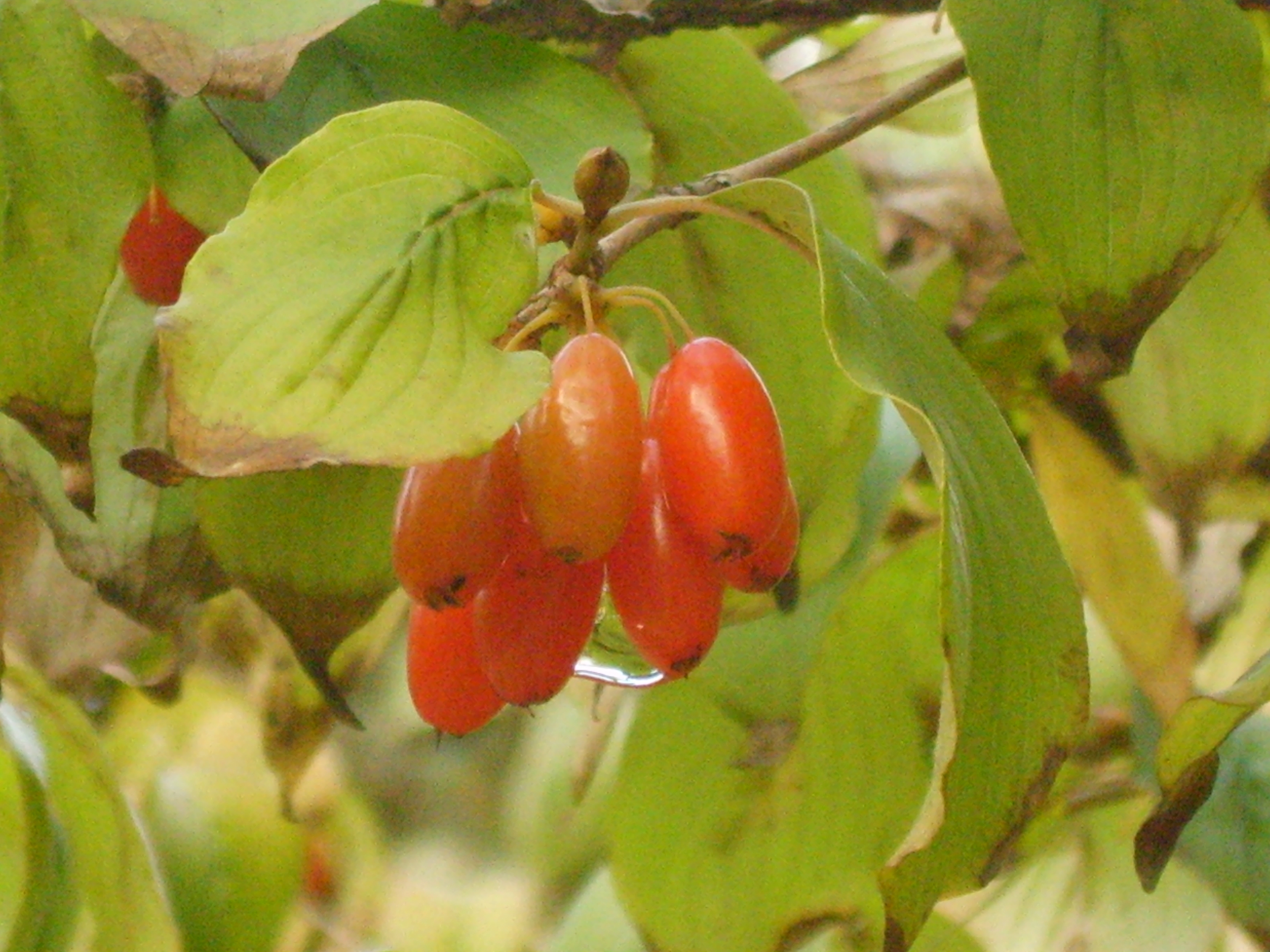 bearing fruit it’s vermilion & green,
as if its blossoms opened anew—
to keep your guest in these mountains
offer him this hibiscus cup

Image links to its source in Wiki Commons:
Cornus officinalis's fruits; photo by Dalgial, who makes it available under the Creative Commons Attribution-Share Alike 3.0 Unportedlicense.

as they drift downstream through poplar reflections,
their own reflections mingled with green tangles;

invisible bird sings in 7/8 time
through ash leaves past the elderberry bushes;

directly in front of me & you reading
the heartbreaking story of the US west;

butterflies spin lazily through shaft of sun,
turn into ash leaves just before they touch ground 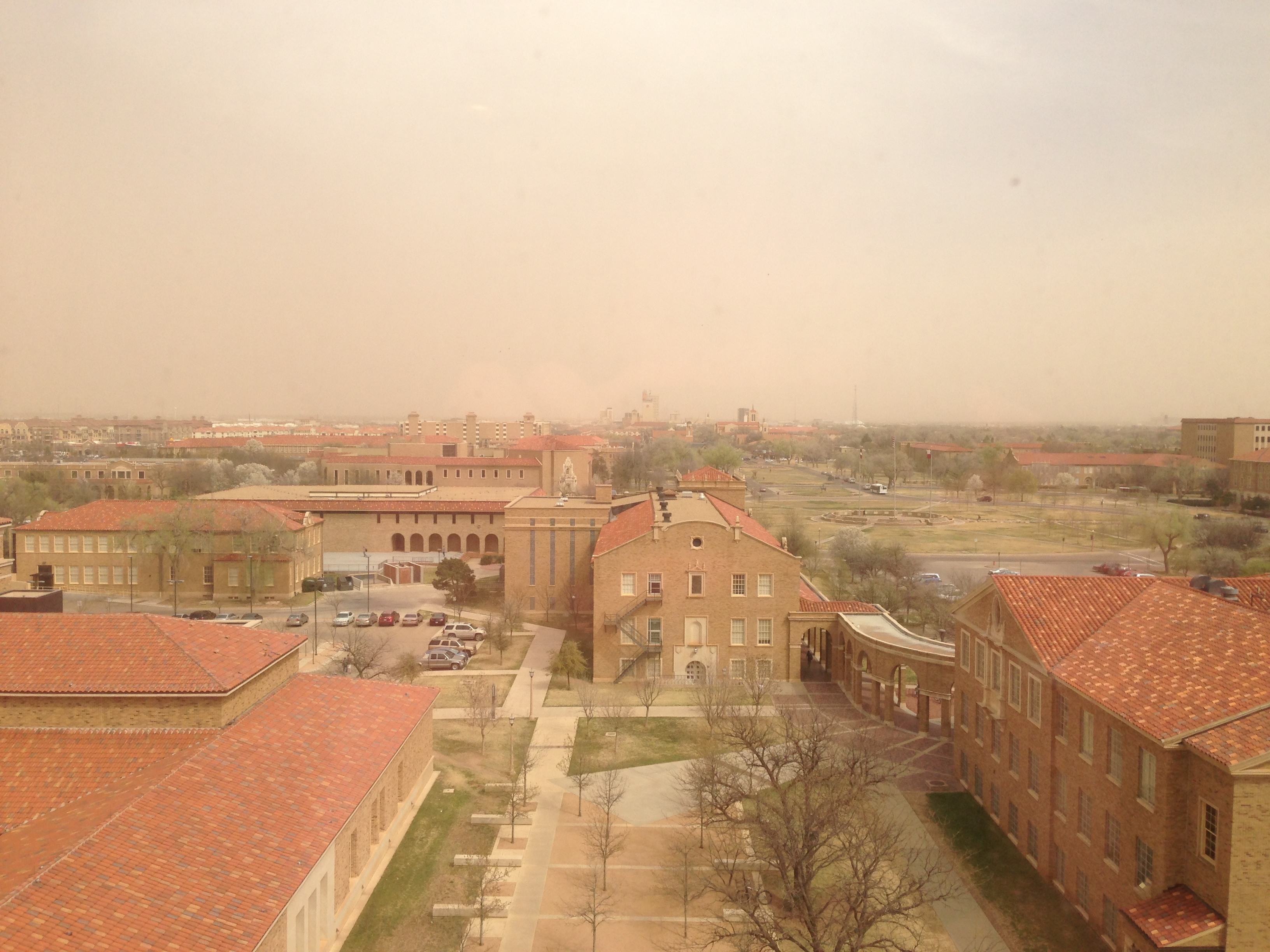 Welcome to the Sunday Music feature on Robert Frost’s Banjo. Today we continue our July appreciation of Jimmie Dale Gilmore.

So far we’ve featured performances that highlight Gilmore’s strengths as a ballad singer, & those strengths are considerable. But Gilmore has always had an appreciation for honky tonk country music, & both his own compositions & songs he’s covered reflect that. Here he is fronting the Flatlanders band in full honky tonk incarnation; the Flatlanders are of course Gilmore, Butch Hancock, & Joe Ely (& various friends over the years). As one pressing of their original recordings pointed out in its title, the Flatlanders are in many ways “More a Legend than a Band”, as all three founders have gone on to successful solo careers & collaborations with other musicians. But fortunately for us, the Flatlanders also still perform together with both new & old material.

Hope you enjoy the music! In other news, I’m hoping to get the blog back up to something resembling a normal schedule in the next week.

Image links to its source on Wiki Commons:
Dust over Lubbock, Texas. Taken from the sixth floor of the Biology building at Texas Tech University, 21 March 2013. Photo by Fredlyfish4, who makes it available under the Creative Commons Attribution-Share Alike 4.0International license. 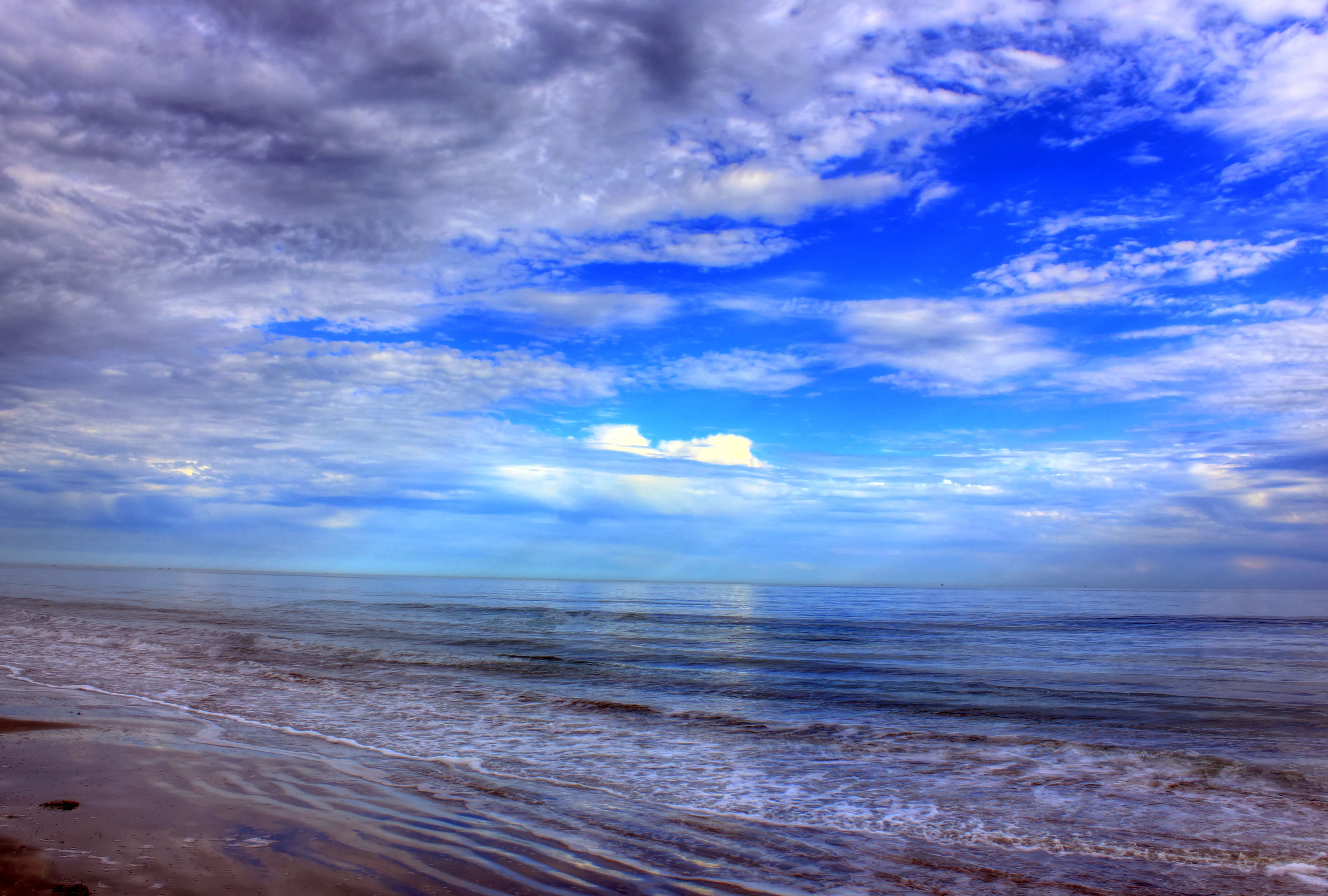 late morning when the blinds open, a bird sings
somewhere beyond white parked cars—we haven’t been

introduced—there’s sunlight of course, a ghostly
butterfly to the east, but not the Far East;

in the Renaissance they knew the soul is black,
the opposite of that souvenir baseball,

the one come to rest against my father’s watch;
afternoon’s firecrackers snap like banjo

strings bursting through a Marshall amp, the one lugged
up Burnside by the guy in black; a sky blue

heart drawn in sidewalk chalk, centered on the crack,
the one where I’m trying to find my mother

a harmonica chord—let’s say C major—
morphs into the sound of a baby crying;

the sun, like the rest of us, is headed west,
the sky with its intentions both good & blue,

is otherwise empty unlike that front porch
piled with dried sunflowers; they make no sound 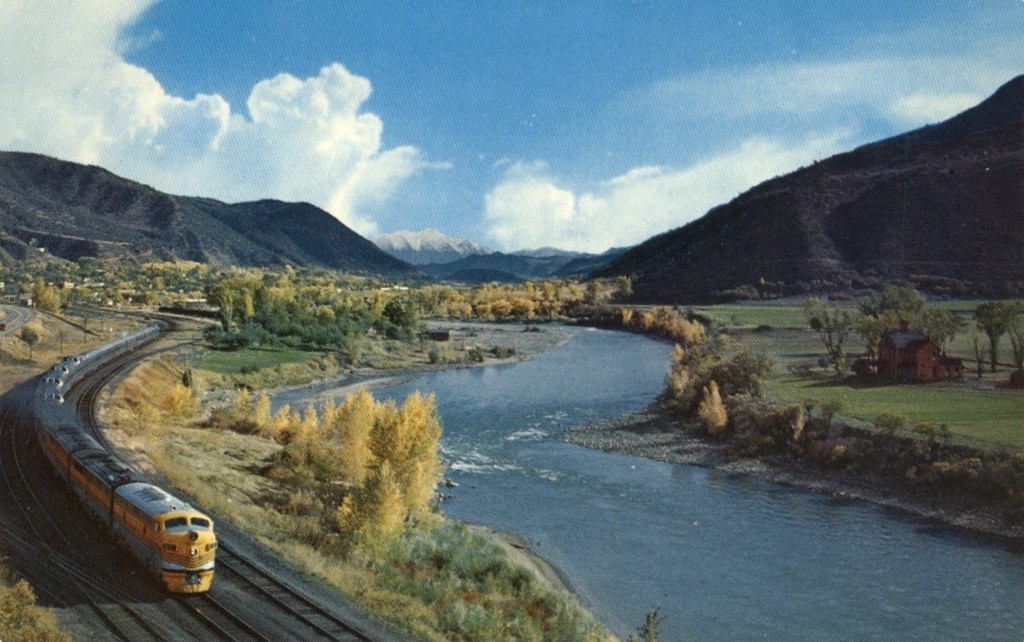 We return with more Jimmie Dale Gilmore for our Sunday Music series.

Today’s video features Gilmore in a solo setting performing his song “Another Colorado”. Gilmore describes the lyrics as “enigmatic”, but they’re also fun & wise, & the melody is beautiful. Just a lovely rendering of this composition, which can be found on his 1993 Elektra album, Spinning Around the Sun.

Image connects to its source on Wiki Commons:
"Postcard photo of the California Zephyr on Denver & Rio Grande trackage along the Colorado River in Western Colorado. In this segment of the journey, the train was headed by Denver and Rio Grande locomotives."
Public domain per Wiki Commons.

one star breaks loose from the Big Dipper, becomes
an airplane, makes straight for the silver half moon,

tail light blinking red; there’s not a single cloud—
the avenue though is thick with cherry leaves

yucca stems have collapsed under their own white
weight; you stop to touch the redbud’s dark heart leaves

to wisdom; the harsh hum of a lawn mower
comes right through the blinds & spins by my shoulder,

despite the fact it’s July, the zodiac’s
shifted, the sky’s cloudless far as I can see 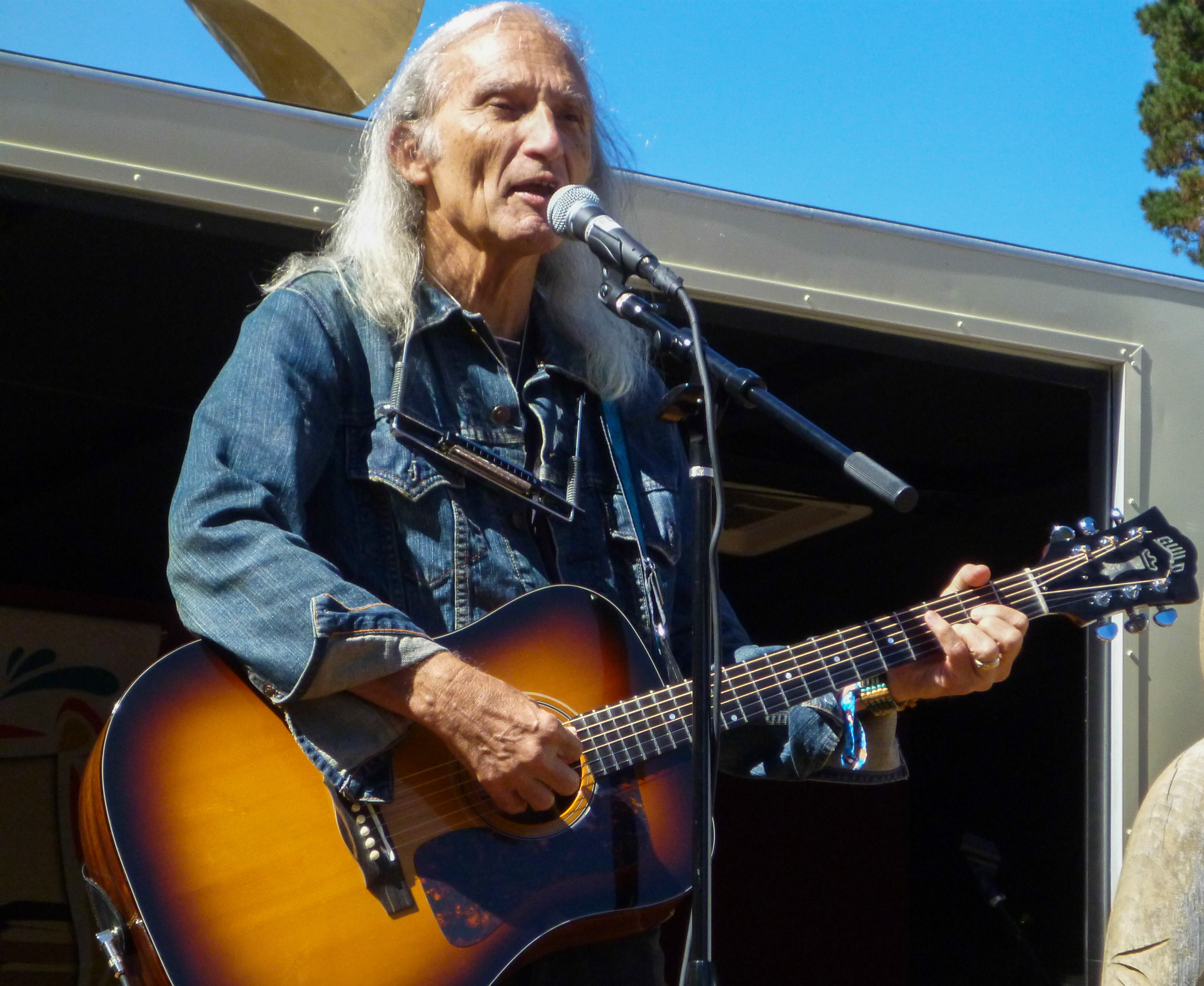 July is upon us, & so we’re introducing a new feature artist for the Sunday Music series. & it’s a bit of a shift from the music we’ve been featuring, as July’s artist is none other than the great Jimmie Dale Gilmore, founding member of the Flatlanders, a uniquely gifted singer & songwriter who works in the Americana sound—or as some have said, in “Country & Eastern music”, given Gilmore’s penchant for mysticism.

Today’s selection is from an eTown concert that paired Gilmore with Dave Alvin (with eTown’s Nick Forster on mandolin), & it showcases Gilmore’s terrifically soulful voice in his beautiful reading of Woody Guthrie’s song “Deportee” (music by Martin Hoffman). Of course no one needs to be reminded of the current relevance of this moving song.

The performance itself starts at 1:30, but what Gilmore has to say in the opening minute & a half is both interesting &—to my mind—important, so I invite you to listen to the entire video.

Hope you enjoy the music! I look forward to bringing you other selections showcasing Gilmore’s talents as both a singer & songwriter throughout the month.


Jimmie Dale Gilmore performs at the 2014 Hardly Strictly Bluegrass festival, 5 October 2014. Photo by David Becker [link provided for this user at Wiki Commons is empty], who makes it available under the Creative Commons Attribution-Share Alike 4.0 Internationallicense. 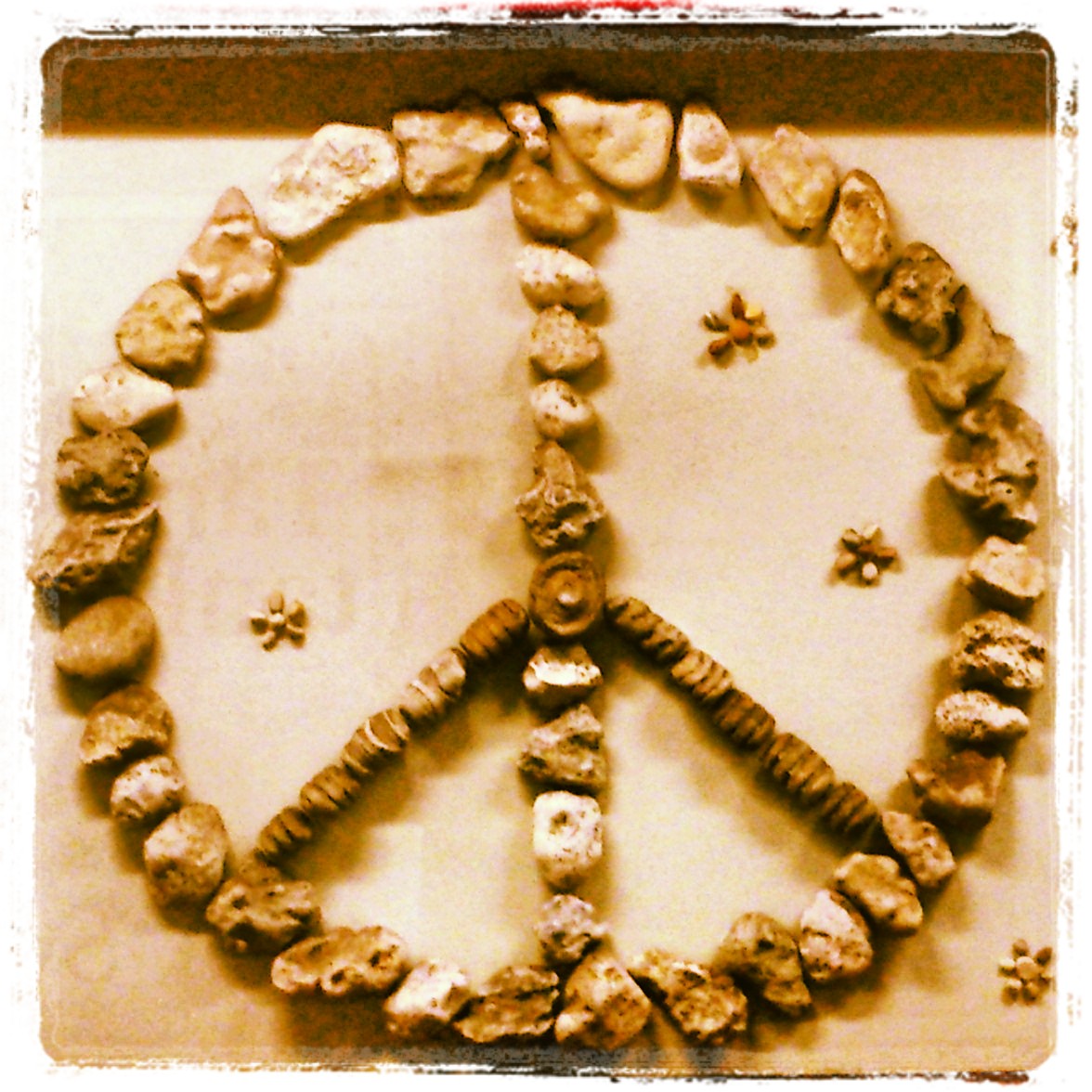 The performance starts at about 1:25, but I’d invite you to stick around for the opening remarks by Dave Alvin & Jimmie Dale Gilmore. For more Jimmie Dale Gilmore, be sure to check out the Sunday Music feature tomorrow & throughout July.

Image links to its source on Wiki Commons:
Peace art (collection of stones) in Näckrosen metro station, Stockholm. Photographed in April 2013. Photo by Sigurdas, who makes it available under the Creative Commons Attribution-Share Alike 3.0 Unportedlicense.