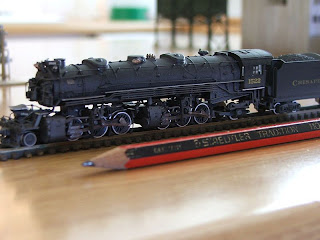 Eberle & I have been so astoundingly busy of late that our own model train is still in the planning stages—but fear not! The virtual Blues Christmas Train is continuing to run here on Robert Frost’s Banjo, making a stop at the blog station every Wednesday & on Christmas, & delivering three songs each day. Contrary to what I announced originally, there won't be train song post this Friday—I'd overlooked the fact that there are five Wednesdays this December.

BULL DOZE BLUES: If you only have time to listen to one of today’s three songs, I’d urge you to make it this one—although you may know this song as “Goin’ Up the Country” by Canned Heat, this is the original version by one Henry Thomas. Fans of Harry Smith’s Anthology of American Folk Music will know one other song by Thomas—his “Fishin’ Blues,” which is the final song on the album (& which has been covered by Taj Mahal). Thomas was born in the 1870s, so he really came from a generation before the great early bluesmen such as Charlie Patton & Blind Lemon Jefferson. By the time Henry Thomas recorded in the late 1920s, he was over 50 years old; those sessions produced 23 tracks.

Thomas had a wonderfully bouncy guitar style & was an appealing singer; but what really sets 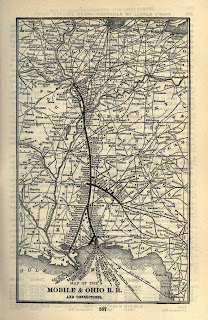 him apart is his use of the quills, a form of pan pipe made from sugar cane reeds. The quills can be held in place with any device similar to a harmonica holder, & thus allows the player to accompany himself on guitar or banjo.

As far as trains go, “Bull Doze Blues” tells how the singer is going away “just as sure as that train leaves out of that Mobile yard.” In Thomas’ day, “that train” would probably refer to the M&O, the Mobile & Ohio Railroad. This train line is also referred to in Willie Brown’s song “The M&O Blues,” which for complicated reasons won’t be on our holiday train song list, but which you can hear on YouTube here; I also did a version on Robert Frost’s Banjo for the Monday Morning Blues series.

The M&O could have taken Thomas to Tennessee, but not directly to Memphis. For that he would have had to change to the Illinois Central line in northern Alabama. Interestingly, the Illinois Central merged with the M&O (which by then had become the Gulf, Mobile & Ohio) in 1972. Henry Thomas: Texas Worried Blues: Complete Recorded Works 1927-1929 (Yazoo)

CHICKASAW TRAIN BLUES: It’s an unfortunate fact that the world of early blues guitar was almost exclusively a “man’s world”—& it’s great that this has since been redressed to some extent with the careers of performers such as Rory Block, Bonnie Raitt, Susan Tedeschi & many others. But there was one woman guitar player in the early days of blues who had all the chops, & that was Memphis Minnie.

Born Liz Douglas in 1897, Memphis Minnie became an extremely popular performer from the 20s thru the 40s. Although her early sides such as “Chickasaw Train Blues” were recorded on acoustic guitar, she was one of the first to take up the electric guitar, & after her 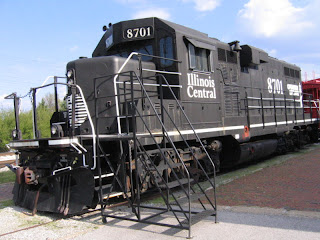 move north to Chicago in the 30s, she became one of the pioneers of what would become the Chicago blues sound. She really deserves to be much more widely known.

It took me a while to research the reference (at least the literal reference) to the “Chickasaw Train” in Memphis Minnie’s song. There was a train named the Chickasaw on the Illinois Central line. Of course, the train itself didn’t have the reputation of only letting men ride; but here the Chickasaw stands in for some seductress who pays women “no mind” while stealing their men. What exactly Memphis Minnie means by the Chickasaw’s attitude toward women is open to conjecture—it could simply be she has no concern for the heartbreak she’s causing other women; on the other hand, the line “I walk down the railroad track, that Chickasaw even wouldn't let me ride the blinds” suggests that there may be some sort of sexual rebuff.

In any case, it’s a great tune—Memphis Minnie’s singing is as good as her guitar playing—& like last week’s “Broke Down Engine,” another example of the train being used as a personification. Memphis Minnie: Hoodoo Lady (Snapper UK)

DEPOT BLUES: What would a list of blues songs be without Son House? I wanted to include his “I Want to Go Home on the Morning Train,” but there doesn’t seem to be a YouTube video for this. As a result, I’ve included “Depot Blues,” a song I’m less familiar with, & also a song he plays “Spanish style”—without a slide; quite unusual for House.

“Depot Blues” tells a familiar story: the train has taken the singer’s woman away, & what’s more, 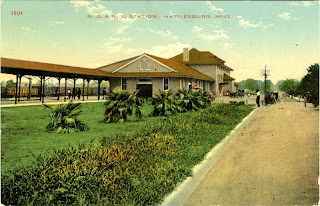 she isn’t “comin' back no more.” House often used so-called floating lyrics—such as the “blues is a worried old heart disease” or “I wish I had me a heaven of my own”; he also uses a lyric about hanging crepe on a door in several songs. Usually, he is hanging crepe on his woman’s door, to symbolize that the feelings between them have died—in this case, the woman has hung crepe on his door to let him know that her feelings for him have grown cold.

“Depot Blues” is an enjoyable track, tho not very representative of Son House’s usual playing style—not only is he playing with no slide on his left hand, but his fingerpicking is more delicate than his typical vigorously strummed attack. His singing is also a bit subdued on this one—usually when House sings, you can understand another of his favorite floating lyrics in an almost visceral way: “the blues is a lowdown aching chill.”
Son House: Delta Blues (Snapper UK)


Pix from Top:
A Bachmann 2-6-6-2 locomotive: (2-6-6-2 refers to the wheel arrangement - & if you read last week's post you know that the 6's are driving wheels) by Wikipedia user Freddie10538, who generously released it to the Public Domain
A 1903 Poor's Map of the M&O Railroad: Public Domain image from Wikipedia
Illinois Central Diesel Locomotive: by Wiki Commons userWisekwai under a GNU Free Documentation License
Hattiesburg Union Station in the early 1900s: Public Domain image from the Mississippi Department of Archives and History