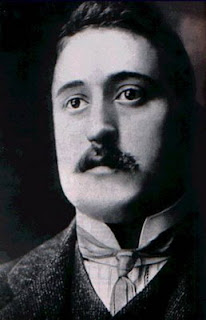 In honor of the season, here’s a poem by the great French poet Guillaume Apollinaire, translated by yours truly back in my San Francisco days. “Automne Malade” is taken from Apollinaire’s masterful 1913 collection, Alcools—you can find this in the original French for free (it being in the public domain) at the splendid Project Gutenberg site. Alcools is here.

Apollinaire himself was larger than life: friend of many influential artists, including Picasso, Chagall, Max Jacob & Satie; a bon vivant who made up his biography as he lived it; a poet of the first order & one of the crucial figures in modernism, especially on the continent; a major precursor of the Surrealists (Apollinaire is widely credited with coining the term surréalisme, which appears in his 1917 play Les Mamelles de Tirésias); a French patriot, & ultimately a victim of World War I (he was seriously wounded on the front in 1916, & died at 38 of Spanish flu during the 1918 pandemic). Apollinaire’s poetry almost always seems fresh & unique—it celebrates the modern, urban world of airplanes & automobiles & the Eiffel Tower, while retaining a lovely but singular lyricism that hearkens back to (& also re-writes) his 19th century precursors.

A few short introductory paragraphs aren’t enough to do justice to Apollinaire’s poetry. “Automne Malade” has always been a favorite of mine. In the original French, the poem is mellifluous & vivid. Most of the poem takes place in the natural world, or even an enchanted natural world, but the appearance of the train near the end is typical. I’ve done my best to convey as much of this poetry as I could in the following translation; however, for those who have French, please look up the original! If you're interested, I translated quite a bit of Alcools, & several more Apollinaire translations can be found on my translation page here.

Hope you enjoy this.

By the edge of far off forests
Stags have belled